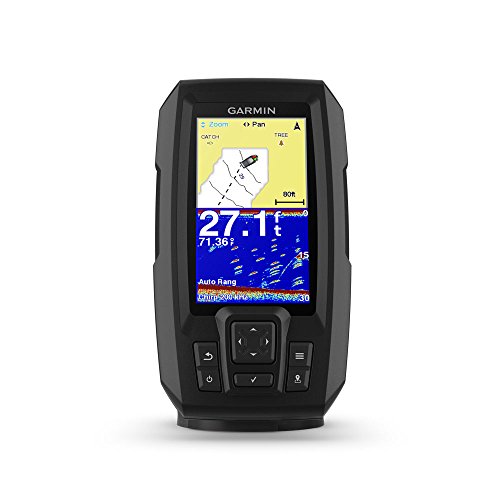 Garmin Striker Plus 4cv Fishfinder with CV20-TM Transducer. 4" GPS Fishfinder with Industry-leading Sonar and Quickdraw Contours Mapping SoftwareIncludes transducer for built-in Garmin CHIRP traditional sonar plus CHIRP ClearVü scanning sonarBuilt-in Garmin Quickdraw Contours mapping software lets you create and store maps with 1 contours for up to 2 million acresBuilt-in GPS lets you mark waypoints, create routes and view boat's speedBright, sunlight-readable 4.3" display and intuitive user interfaceRugged design for every fishing environmentThe STRIKER Plus 4cv fishfinder with a bright 4.3" display and built-in GPS features Garmin CHIRP traditional sonar, Garmin CHIRP ClearVü scanning sonar and Quickdraw Contours map drawing software, which stores up to 2 million acres of content with 1' contours. The built-in GPS lets you mark and navigate to waypoints and shows your boats speed. Garmin Quickdraw Contours Nobody knows the waters you fish better than you and your fellow fishermen. While you are trolling the shorelines and the depths, Quickdraw Contours mapping software creates HD fishing maps of the places you've been. No special knowledge is required. STRIKER Plus 4cv can now store up to 2 million acres of your Quickdraw Contours maps with 1' contours. CHIRP ClearVü Clarity The STRIKER Plus 4cv fishfinder includes Garmin CHIRP technology combined with Garmin ClearVü scanning sonar for a nearly photographic, wide image of what passes below your boat. You clearly see structure, submerged objects and fish. Paired with Garmin CHIRP traditional sonar for remarkable target separation, this transducer will help you catch more fish. GPS Fishfinder The built-in, high-sensitivity GPS finds and maintains your position anywhere you go on the water. The GPS allows you to mark waypoints for different locations. So, if the fish are biting in 1 spot, you can mark it, and return to it on your next trip. Mark docks, boat ramps and other locations on the lake, and create routes back to them for your next trip. GPS also allows STRIKER Plus 4cv to show your speed on screen, so you can be sure you're trolling at the right speed for the lure youre using or in wake-controlled areas. Built for You The STRIKER Plus 4cv fishfinder makes fishing a breeze, and it's built to work in any